Renee Radell is a consummate colorist with roots in American Figurative Expressionism whose career spans more than 70 years. Best known as a contemporary social commentary painter, her art carries the momentum of America’s rise to super-power post WWII, a generation beyond earlier Social Realism.

A figurative painter at core rooted in expressionism,  Renee Radell also applies brush and palette to portraits, landscapes, still life, and abstract painting, ordaining each picture with its unique persona. A look at her oeuvre will demonstrate diverse and highly skilled ventures in imagery, materials and personal philosophy.

Renee Radell has over 60 years of art shows and decades of professorships from her roots in Michigan to mainstream art in New York.  She is represented in numerous personal and institutional art collections in North America and Europe. She resides in New York and Pennsylvania with professor and sculptor Lloyd Radell, husband of 65 years.

Renee Radell entered the art world in the State of Michigan as a student in the prestigious Art School at the Detroit Society of Arts & Crafts, now the College for Creative Studies.  There, she studied painting under Sarkis Sarkisian and life drawing under Robert Diebboll.

Watercolor was the first medium the young artist mastered.  She became a consistent top prize winner at Detroit and regional watercolor painting competitions.  The Detroit Institute of Arts, the Walter P. Chrysler Museum and the Dearborn Museum of art purchased these early works.  Soon the artist was exhibiting watercolor paintings in group and her first solo art shows.

At Arts & Crafts, Renee Radell was first exposed to the richness of oil painting, a medium she would favor for a lifetime.  Indeed, the late Edgar P. Richardson, Director of the Detroit Institute of Arts and co-founder of the Archives of American Art  wrote in the catalog forward for her first one person oil painting show in 1959:

“Her art today is not a charming and “artistic” one; it is one of passion and power, which one looks at carefully and with the most serious attention.”

Renee Radell quickly gained representation in Michigan and regional art galleries with a series of solo and group art shows along with top prizes at art competitions.  She expanded Eastward through gallery representation in Ohio and Pennsylvania toward the art center of New York City.

In the 1960s, Renee Radell emerged in the mainstream gallery scene of New York as a pioneering American woman social commentary painter.   Her art was a new form of Social Realism, as pioneered earlier by such American artists as Ben Shahn and Jack Levine..  Her sociopolitical imagery was charged with a painterly version of protest art and political satire.

Five solo art shows in Manhattan, featuring paintings such as The Tide and Political Fertility Rite, incited critical acclaim in the major art press at home and in Europe. Her sociopolitical suggestions, deftly stated with signature brushstrokes and visceral impact, struck a chord among the intellectual avant-garde during a time of turbulent change.  This discovery of creativity was all the more remarkable within the context of developments in the art world. At the same time, Pop Art and Minimalism were new darlings in the art world. American Contemporary Art was doing a victory lap with second generation Abstract Expressionism.

By the 1970s, the Vietnam War stage was imploding and domestic politics had grown ugly.  During this period, Renee Radell took no prisoners in her passionate attacks on the injustices inherent in war and the inequalities within the very sociopolitical system shaping the American Dream.

Simultaneously, Americana and family became recurring themes in her artwork, reflecting a personal dimension of respect for traditional values.  Then a mother of five children, the artist’s circumstance suggested a respite as Artist in Resident at Mercy College of Detroit.

Although Renee Radell has an exceptional level of fortitude and her withdrawal from New York was temporary, it supports the thesis of art historian Linda Nochlin about the challenges “great women artists” often face.

“Why have there been no great women artists? Art historian Linda Nochlin asked this question in a now famous article in Artnews magazine in 1971. Nochlin’s query was meant as a provocation. Herself a well known feminist, she intended to demonstrate, not that there were no great women artists, but that throughout history, women artists had been faced with circumstances – among them, the demands of child rearing, lack of access to art education, and ingrained cultural beliefs about women’s creative and intellectual inferiority– that inevitably limited their access to the support system that made male ‘greatness’ possible.”

In the early 1980s, Radell fulfilled a life-time dream and moved to New York City where she currently maintains a residence.  Compared with earlier literal content, her work became more subjective and allegorical through the use of myth, symbolism and elements of surrealism to represent the societal enigmas that she observes so keenly.

She began a 15 year teaching role at Parsons School of Design, close to an East Village studio where, despite limited natural light, she would bring canvas to life for the ensuing 20 years. She embraced the challenges of New York with youthful vigor at a time when the art market was brimming with new creative aspirants, armed with marketing savvy and new technologies.

During the 1980s, Renee Radell first ventured to Europe where she taught painting in summers at the Lacoste School of the Arts in France, in the Vaucluse region where European impressionism was born.  The artist had not experienced plein air painting since her teenage years during the occasional country excursions in the Michigan and nearby Canadian countrysides. Shortly, she began travelling throughout Europe, creating landscape and cityscape series in Spain, France, Germany and the Netherlands through much of the decade.

Ever a student of history, Renee Radell developed in the 1990s a powerful series of visual “Morality Plays” with deference to the theatrical format popularized in Medieval times.   The resulting images, packed with symbolism, are nothing less than stunning. Without moral suggestion or passing judgement, powerful themes emerge of life’s cycle, chance, hope, boredom, exuberance and despair.

At times, the playful imagination of the artist would emerge, yet always accompanied with undertones of spirituality or thought-provoking social commentary.  For example, the wonderful Puppet House series of oil paintings, compose a morality play in which the artist’s studio props come to life in an imagined world of surrealism divorced from reason. The merriment of the ensemble must necessarily end to return to a world “more full of weeping  than you can understand” (from the artist quoting W.B Yeats).

As the French plein air inspired this artist, so too did a move to her new studio in New York’s bustling Chelsea art district after the turn of the millennium.  Situated high above the street within view of the Empire State Building, flooding natural light and spacious rooms encouraged Renee Radell to produce mural-scale works, some as triptychs, using a variety of mixed media with sculptural elements.

For example, Raindrops Ceremonial Triptych is a morality play in itself and the culmination of the “Raindrops Series” created over a five year period.

This multi-panel, mural-scale work,  allows the artist to expand on several of her ongoing favorites themes, including fate and choice.  Hence, raindrops serve as the metaphor for life’s bounty and potential. Flute playing jesters summon the rain cloud in the left panel. As a result of the shower, humans of all ages attempt in a ritual to capture the falling raindrops in the center panel, represented as quivering glued-on strings.  Thus they  make the most of life’s gifts. Finally, the sky clears in the right panel, symbolizing the ephemeral nature of opportunity and the need to act when chance presents itself.

The Making of a Morality Play 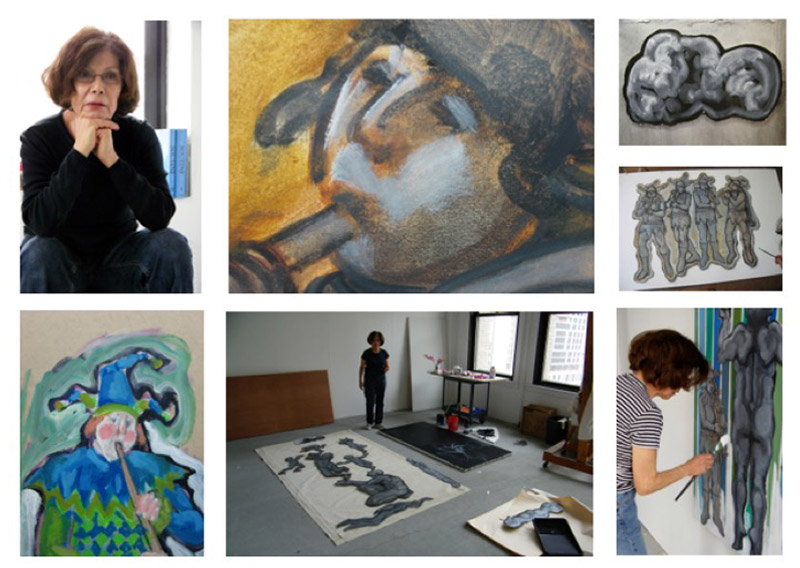 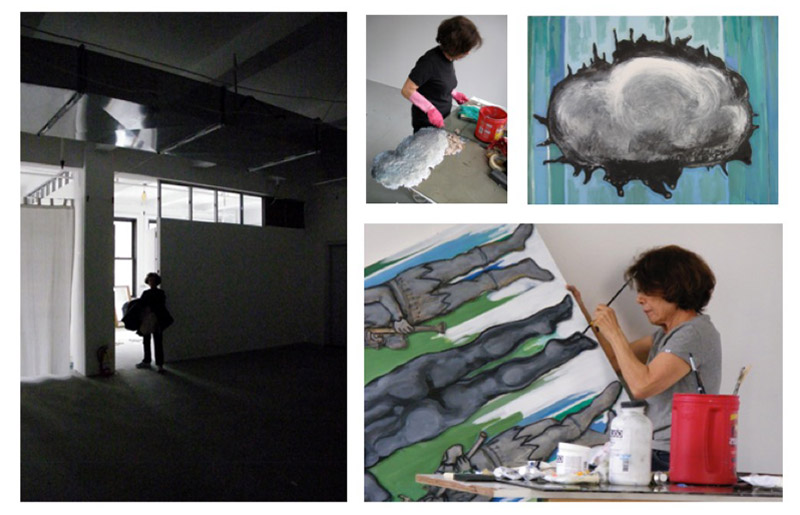 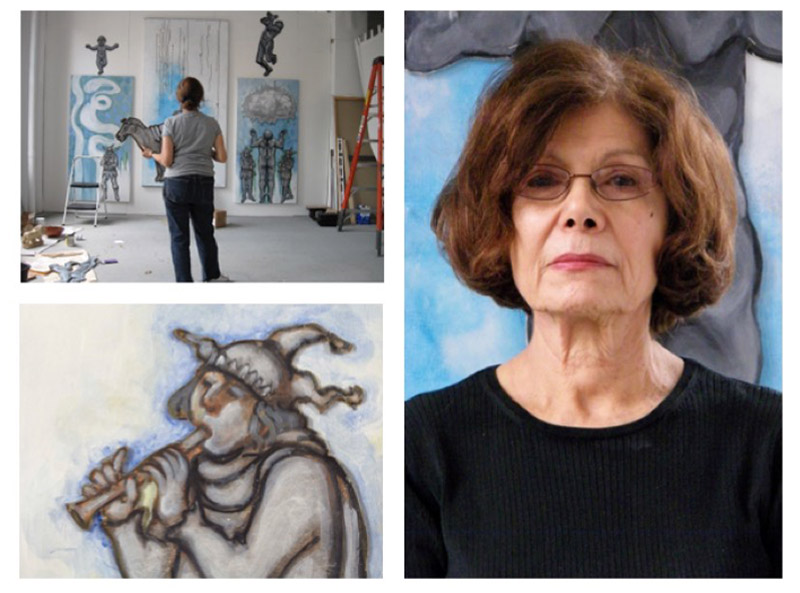 With a lifetime commitment to figurative painting and representational art, Renee Radell accepted an immense challenge in her 8th decade of painting.  Although abstract art has appeared from time to time in the oeuvre since her early watercolor period, never before has she systematically produced a flow of watercolor paintings such as those created in the past 10 years.

Many of the abstract paintings since 2010 carry names borrowed form music.  For example, Vibrato, Cadence, Crescendo, Fugue, and Rhapsody are each bursting with color, mood and life on abstract art paintings of Renee Radell.  A keen observer can also discover traces of landscape and figurations within these lessons in creativity.

Befitting a career punctuated with experimentation in media, technique and subject matter, the artist continues to explore assemblages, new materials and the marriage of painting and sculpture in the context of creativity.  Her studio props, many of which are puppets, continue to appear in a series of contemporary still life steeped in symbolism.

In 2016, Predmore Press published a comprehensive monograph titled Renee Radell Web of Circumstance by Eleanor Heartney.  Therein, Heartney, a past President of the American Section of the International Art Critics Association, concludes:

Renée Radell exemplifies the triumph of art over circumstance. She is proof of Nochlin’s slyly unstated point: There are indeed great women artists. The history of art, like the concept of “genius,” needs to be readjusted to accommodate artistic paths, approaches and ways of thinking that do not follow the standard (male) trajectory. Radell’s unique synthesis of art history, philosophy, social observation and formal experimentation has yielded a body of work that will stand the test of time. Her lifelong dedication to the most profound questions of existence will continue to resonate for all who care about the human condition.